AN EVENING WITH DAVID J KAPLAN , ABOUT THE MUSICIANS AND THEIR LIFE ON BOARD THE TITANIC
Midnight Heroes
The eight young band members on the Titanic played to the end.  These talented musicians were true heroes.  A comprehensive story of the Titanic’s band is rare.  A photo biography of each musician and the legacies that each left behind, creates a captivating and an emotionally moving topic.
​ 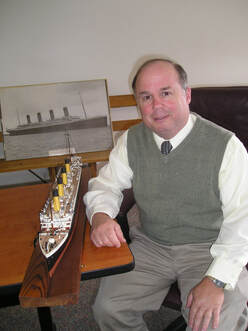 
​
David J. Kaplan
​                                  Petoskey, Michigan
​Biography
David Kaplan was born and raised in the Washington D.C. suburb of Silver Spring, Maryland.  After graduating from the University of Maryland with a degree in education, he taught electronics, power mechanics and drafting for 30 years in the Maryland’s Montgomery County Public Schools system.  During that time, he was involved in civic matters.  In the 1980s, David tried to keep Northwood High School, a Silver Spring school, from a planned closing.  His efforts failed, however, he convinced the County Government not to raze the School.  His enrollment projections eventually proved to be accurate and the school was reopened in 2004.
As a result, the School’s stadium is named in David’s honor.  He retired from teaching in 2004 and moved to the Petoskey, Michigan.

David’s interest in the Titanic began when he was 9 years old while watching the 1953 movie “Titanic” starring Clifton Web, Barbara Stanwyck and Robert Wagner.  Even though it wasn’t a great movie, it caught his attention.  From that point on, he has been studying the tragedy, the ship and its passengers.  David has been a member if the Titanic Historical Society for over four decades and subsequently joined the Titanic International Society and the Titanic Society of Atlantic Canada.  Over that time, he has been lucky to meet eighteen survivors, some more than once.  David has had the pleasure of meeting with Melvina Dean several times.  She was the last living survivor as she passed away in May 2009.

David has visited a number of Titanic related places numerous times in the UK and Ireland.  These include:
- Harland & Wolff; the Belfast shipyard where the Titanic was constructed
- Cobh (formerly Queenstown), Ireland which was the last port of embarkation for
the Titanic
- Southampton, England where most of the crew lived and the ship started her
maiden voyage  In addition, he made a visit to the ship’s sinking location in the North Atlantic Ocean while the Imax movie “Titanica” was filmed.
In 1996, David was asked by Fox to be an “extra” in the 1997 blockbuster movie “Titanic”.  Unfortunately, his teaching career prevented him from participating in the movie production.

Over the years, David has collected a variety of artifacts.  In addition, he has constructed various display models of the ship and the disaster.  David has given many presentations to schools, hotels, service organizations, libraries, museums, churches, community groups, military groups and senior centers.  More recently, he has also given presentations on board the Queen Mary 2 and the Queen Elizabeth. Later this year, he will be presenting in Canada, England and Scotland.

David enjoys worldwide travel on the world’s seas.  He has sailed 438 days with the Cunard Line (which includes 39 Trans-Atlantic crossings) plus 152 days with other cruise lines.